NOTICE: We've had to run some maintenance on the site and that resulted in the deletion of all user data. If you have something on you user page, please re-register ASAP.

If this site has helped you, please consider following me on Twitter or Twitch!

This page is for the translations of the help dialogs that appear after completing the tutorial, after using a feature for the first time. For the opening tutorial; the one you see when you start the game for the very first time, click here. 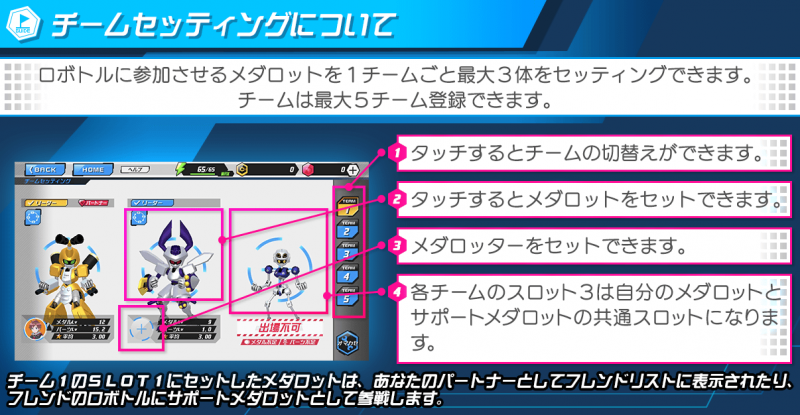 A Robattle party consists of a team of up to three Medabots. You can store up to 5 team configurations.

Note: You can still equip a third medabot of your choice by simply selecting yourself as the "friend". 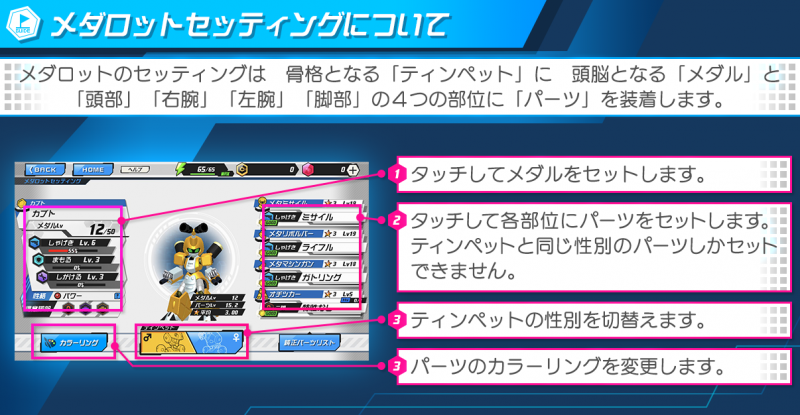 The Medabot's Settings allows you to modify the Tinpet, which consists of the medal, and its four Medaparts; (the head, left/right hand and legs). 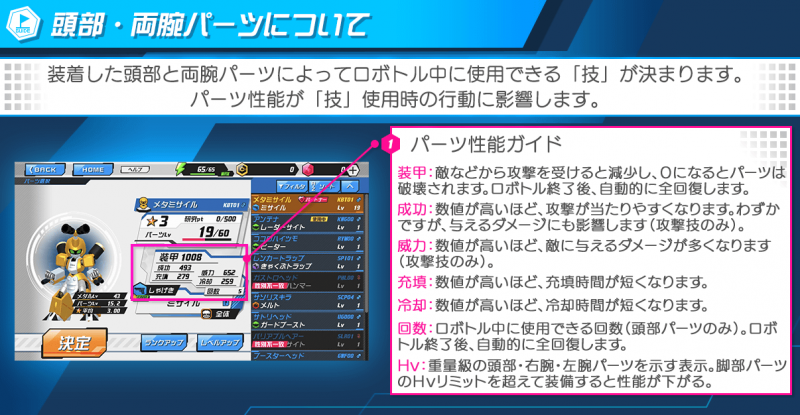 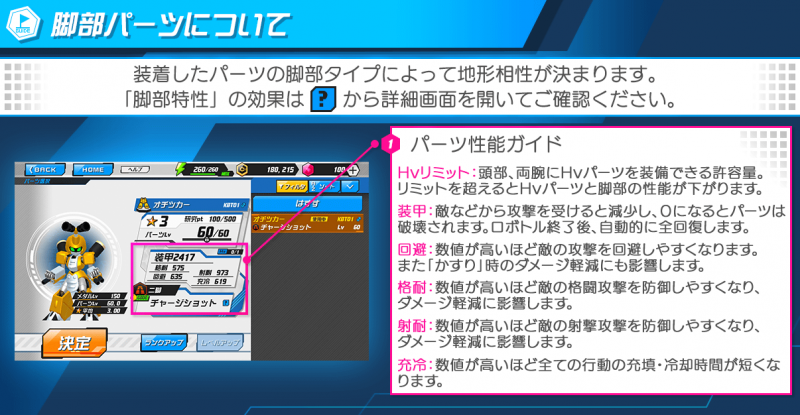 The type of legs you equip onto your Medabot determines the amount of load it can carry, and its speed. Different terrains also affect the efficiency of different leg types. 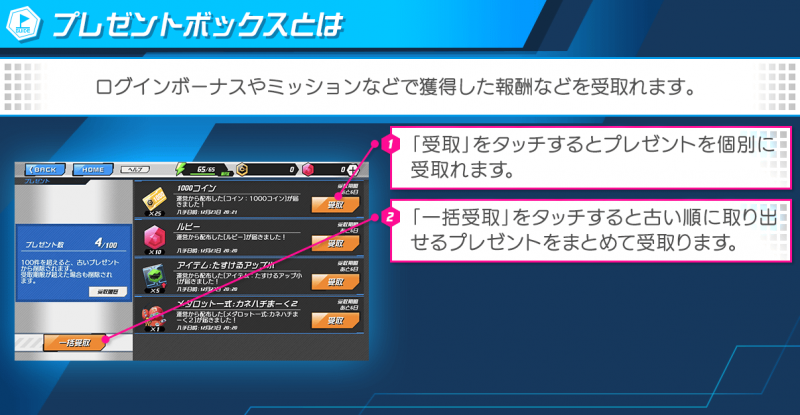 What is the Present Box?

Here, you can claim rewards that you receive from the daily login bonus or completed missions.

There are many objectives to do in the game, which can get cluttered. From here, you can manage all your missions and claim their respectives reweards. 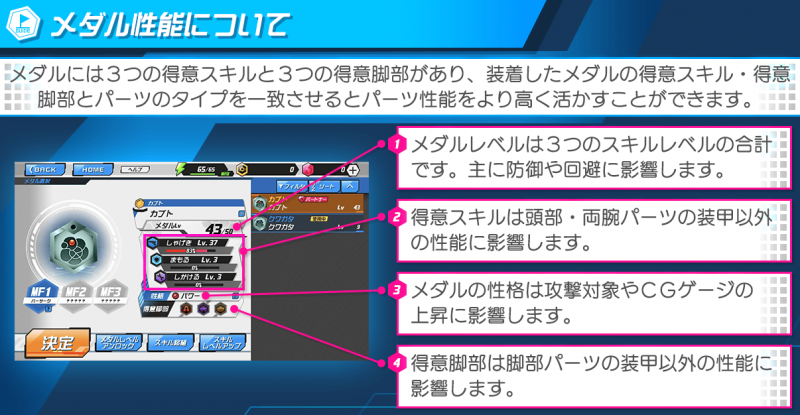 Every Medal has three specialty skills that you can equip. The skills you equip can increase the efficiency of the parts you have equipped. 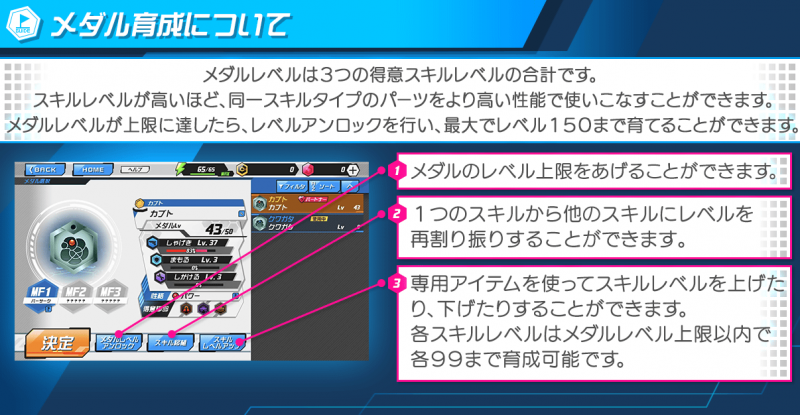 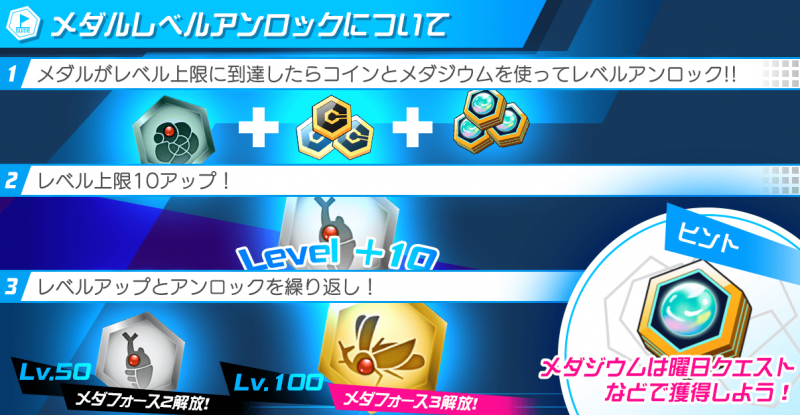 You can get MedaGems through specific weekly (day-specific) quests! 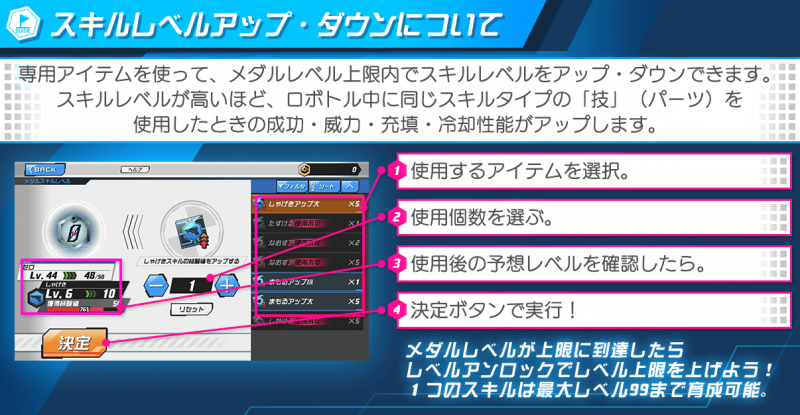 Using Upgrade/Downgrade items, you can level up and down your Medal's skills. Different medals will have different skills, which in turn directly affect's your Robot's Medaparts. These passives add additional power to compatible head, arm or leg parts.

Don't forget to watch out your Medal's Level Limit as any additional levels will overflow and be wasted when applying a upgrade that gives more experience than your medal can hold. Furthermore, a single skill can only be leveled up to 99.

TL Note: Skills are passives, this is different to Medaforce skills, which are their own thing. 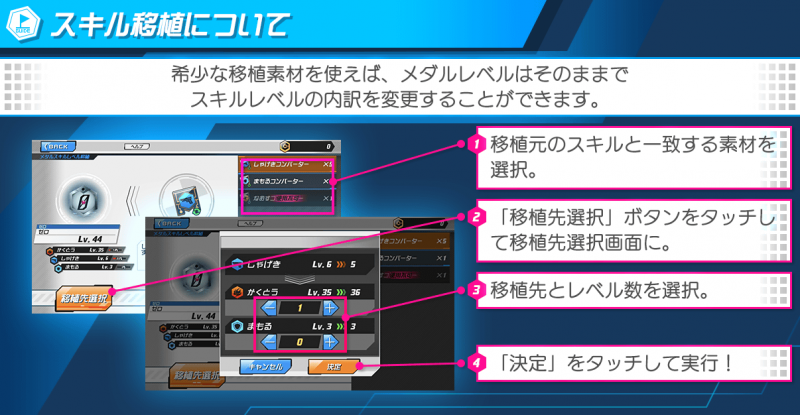 Rare Skill Transfer chips are an alternate way for you to reallocate your Medal Levels, if you find that you don't have enough levels to add more.

1. Select the skill you want to transfer levels from. 2. Press this button to bring up the transfer dialog. 3. Reallocate the level medals to your desired levels 4. Select "Confirm" to apply your changes! 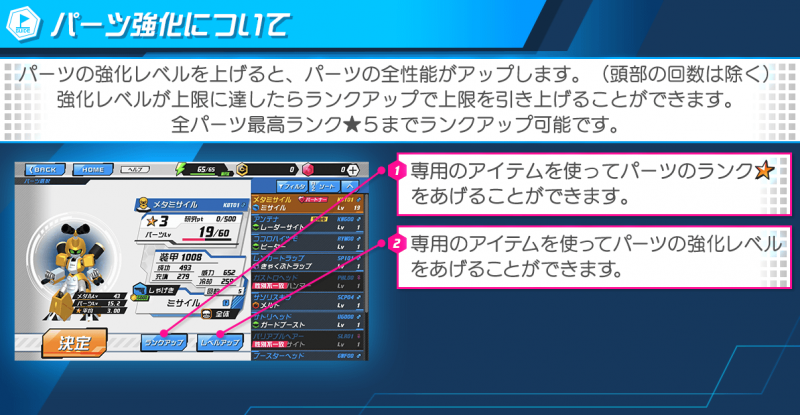 Raising the part's Training Level will increase the stats of the part itself (with the exception of Head Part uses). Once you max out your Training Level limit, ranking up will unlock and raise said limit. Each part can earn up to a five star ★ ranking.

You can train your parts using blueprints to level them up, which increases their stats. 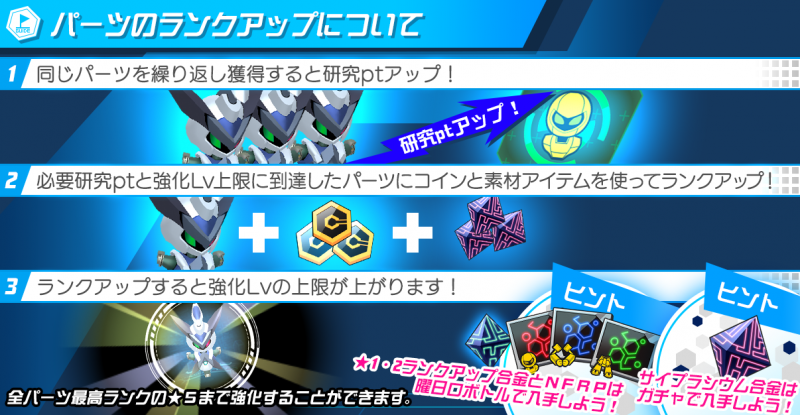 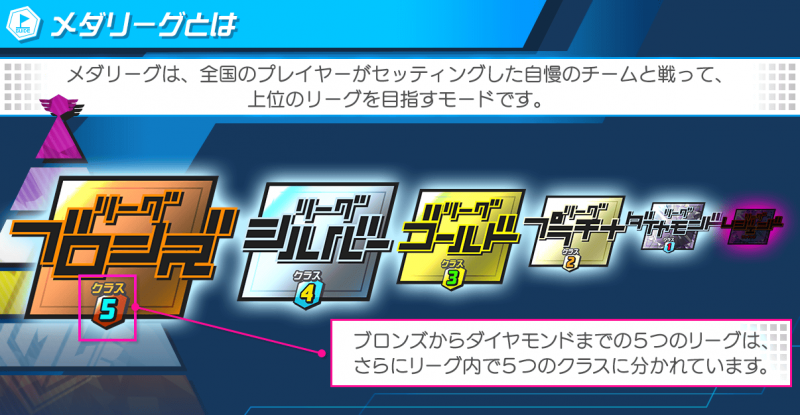 MedaLeague is a competitive mode in which you will be put against teams of other players from around the country as you advance through each league. There are five leagues in total, ranging from "Bronze" to "Diamond". Moreover, each league is separated into five classes.

Note: There appears to be a sixth league called the "Legend League", which is not counted for whatever reason. 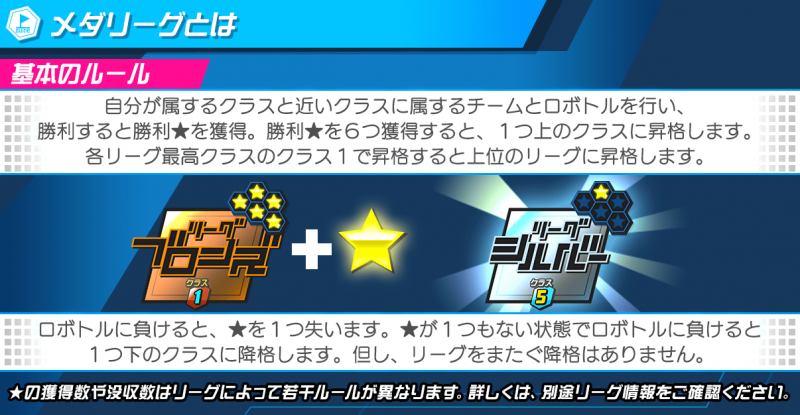 Rules: A team with a class nearest to yours will Robattle you. If you win, you will earn a Victory Star ★. Earning six Victory Stars ★ will advance you to the next class. Advancing past each league's highest class, that being Class 1, will promote you to the next league. Losing a Robattle will cost you a star ★. In the event that you do not have a single star and you lose a Robattle, you will be demoted to the previous class. However, you will never be demoted to the previous league.

The amount of stars ★ earned or lost will slightly vary within each league. For more details, check the special info provided by each league. 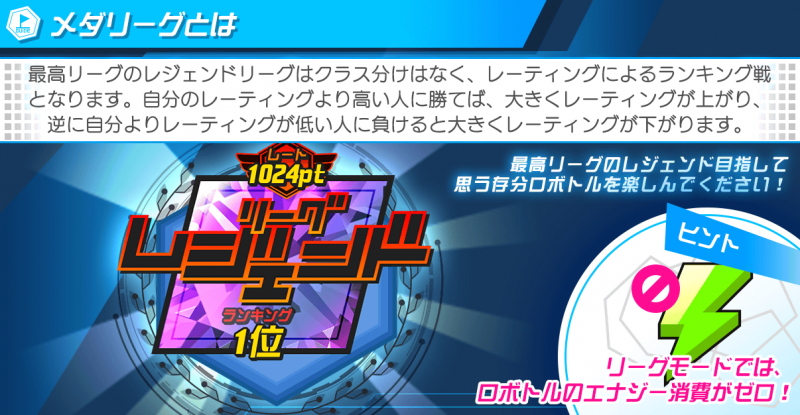 Hint: Battles do not cost energy here, either. 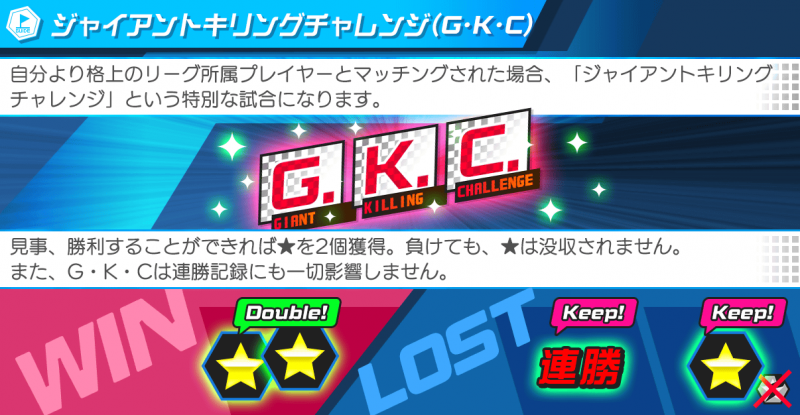 Sometimes while matchmaking, you may be placed into what's called a "Giant Killing Challenge", matched with a player a bit higher than you.

In a Giant Killing Challenge, if you win a match, you are guaranteed two stars. However, if you lose the match, you will not lose any stars, nor will you lose your winning streak. 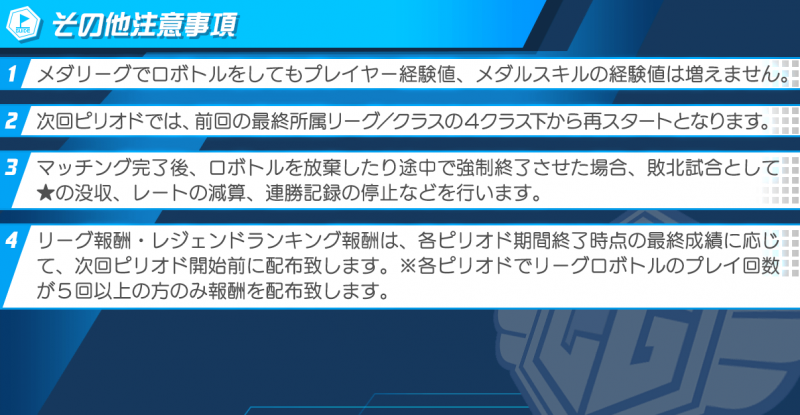 Other Tips and Warnings 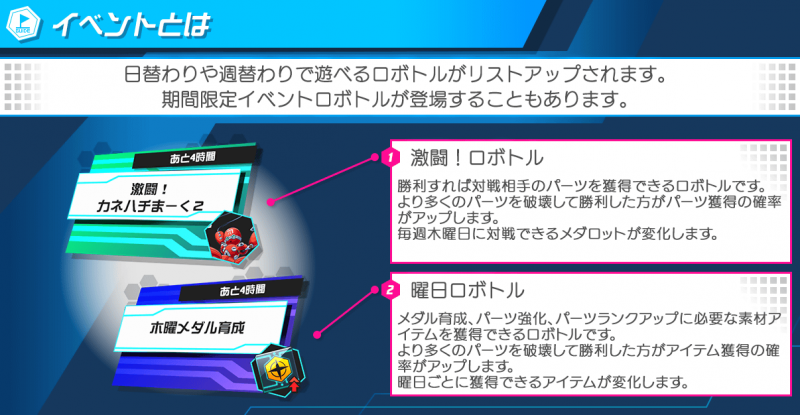 Everyday there are different events you can Robattle (play) in to get listed rewards. Note that events have a schedule and are not always available. 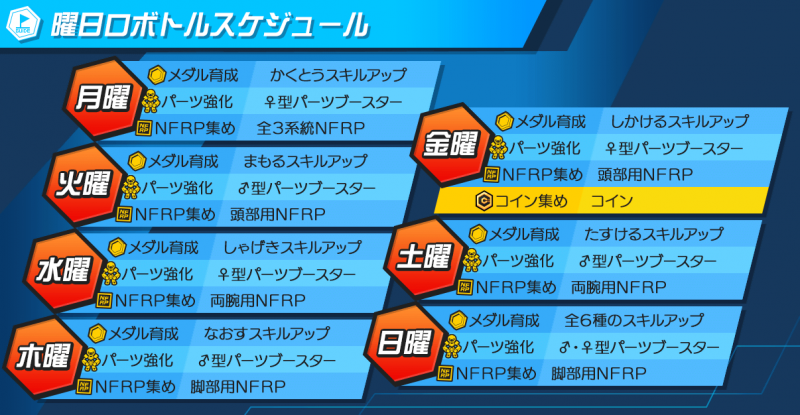 This is the schedule for weekly training? boosters.

In addition, everyday (other than Thursday, which is all day) at 8am, 1pm and 9pm JST, the coin dungeon is open for one hour at those three times.